We're excited to introduce some UX improvements that can help new users starting with Deploy with balena on balenaHub. From application and release build speed improvements, to new UI elements, we added a number of new features to remove the friction from the first-time user experience. 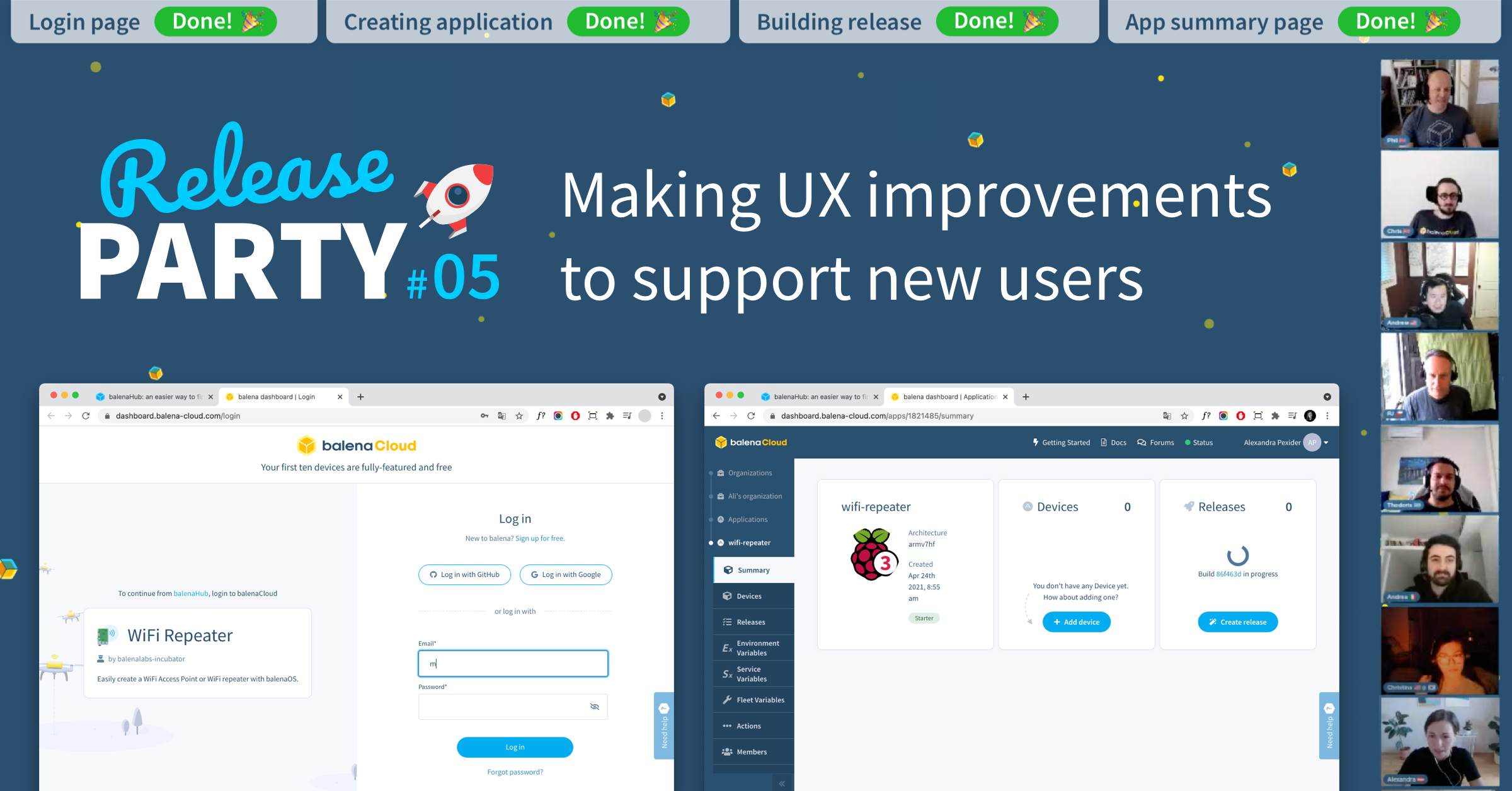 Every once in a while, our team gets together to sprint on releasing a new feature. In this case, it’s a number of UX improvements to help our newer balena users trying out their first project. We run Release Parties to challenge ourselves, celebrate the work we do together, and put a spotlight on how well we can collaborate as a remote, international team spanning multiple timezones.

Check out the stream here, or watch the embedded version above.

Our mission at balena is to remove the friction from IoT fleet management and edge app development. We do this for our biggest customers in the same way for our newest users. The more we can lead new users to initial success, the more likely they’ll want to use balena in production, tell their peers, and build tomorrow’s amazing edge applications with us.

Many new balena users start at balenaHub, our catalog of edge apps and app enablement tools, and use the Deploy with balena button to immediately add their application to their balenaCloud account. While this process is decent, there are always ways to improve it. 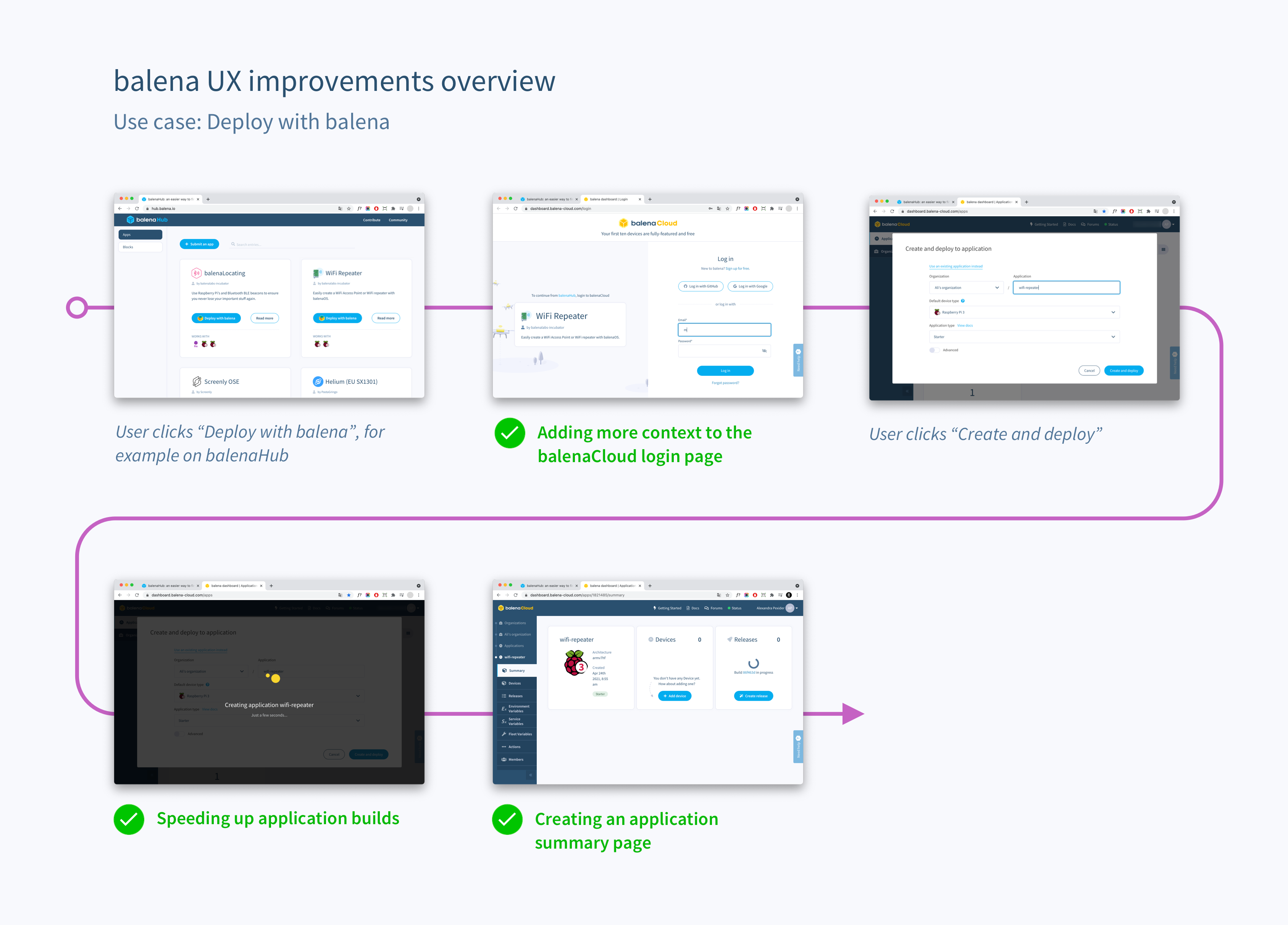 A group of product builders looked at the user journey and supporting analytics and identified four ways to smooth out this process. Not only do these improvements help new users, but experienced balena users will find them useful as well.

What did we accomplish?

During the seven-hour livestream, we tackled:

PREVIOUSLY: When a user without a balenaCloud account clicked a Deploy with balena button, they were taken to our login page. The login page had the required buttons and fields to create an account or sign in via Single Sign-On (SSO), but not a lot of context about the project. 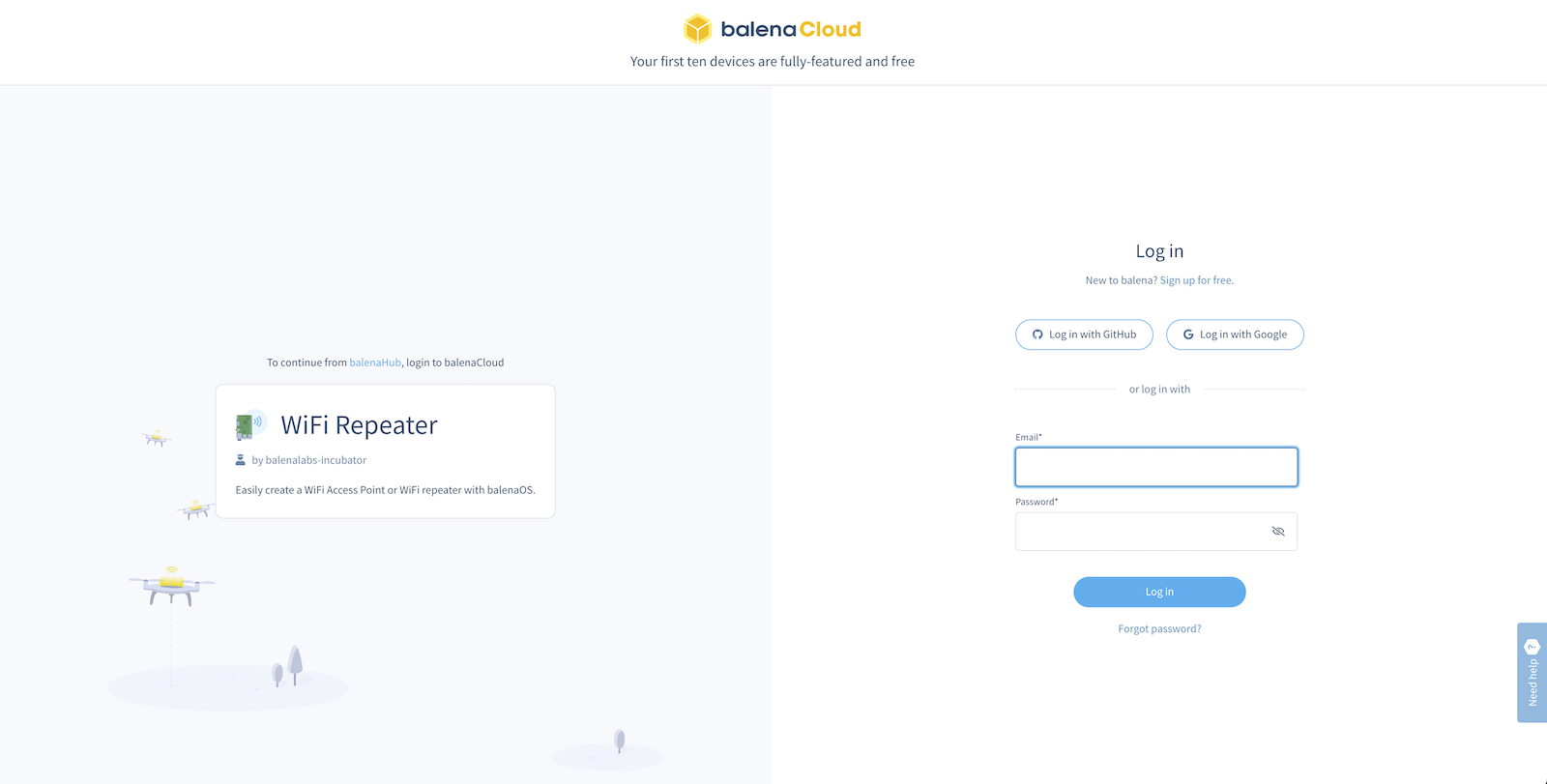 UPDATE: Now the login page includes context about the project that the user is starting (on the left side of the screen), sourced from the application metadata via balenaHub. This way, a new user is reminded of what they’re about to set up by starting a balenaCloud account.

PREVIOUSLY: After a new user signed into balenaCloud, they were prompted to create an application. Upon doing so, the application creation process started and the user was shown a transparent dark screen with a status message. 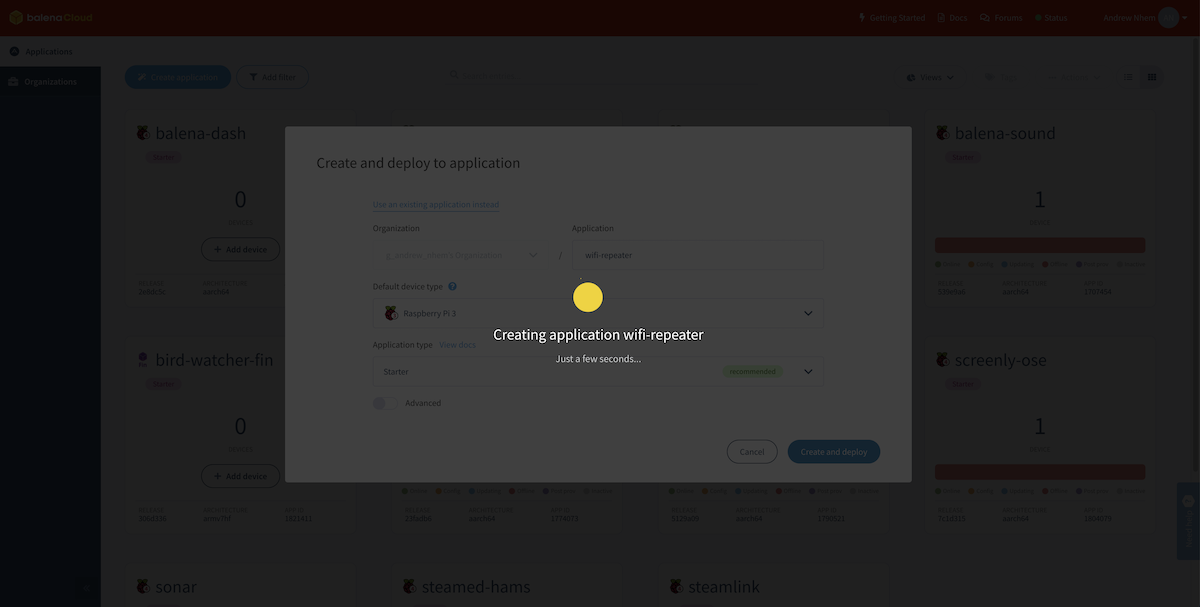 PREVIOUSLY: After creating an application, the application’s first release is built for the user. This is difficult to notice right away as depending on the size of the release, and it can take a while for this process to complete depending on the application. This notification also appears in a sub-navigation portion of the balenaCloud UI that some people often miss.

UPDATE: We’re still working on ways to improve build release speeds. Shoutout to our teammate, PJ, for taking on this massive challenge throughout the Release Party! We’ll drop an update here when we get a definitive update on things here.

PREVIOUSLY: When a new user created their application, they were sent to the Devices page on balenaCloud and asked to add a device. We reviewed analytics internally showing that this is a step where many new users stop in their journey toward success.

UPDATE: To help both new and existing balena users, we introduce an Applications summary page. This new page uses similar UI elements as the Organizations section (on the left-side navigation). Three cards show basic application information (also sourced from application metadata via balenaHub), device information, and build release information. We have plans to improve upon these cards as we learn more about how folks use this first version.

We're hypothesizing that by adding this summary area, users have a clearer indication of the status of their release and can see that they need to add a device to their application.

How to try these new changes

The easiest way to see these changes is to add an edge application from balenaHub to your balenaCloud account using the Deploy with balena button. We’ll be fine-tuning these new features over the next few weeks as people start to use them and we start gathering information about what’s working and what needs improvement.

Get in touch with us on social media or the Forums and sound off on these new changes. All of our product improvements are based on the feedback we get from all of our users. We’re very excited to hear what you all think of these new changes.

See you at the next Release Party!