Good news everyone! As we very recently hinted, we have been working hard on giving users a complete image management workflow for blocks, including image release management and image references that consumers can use directly in their docker-compose files. 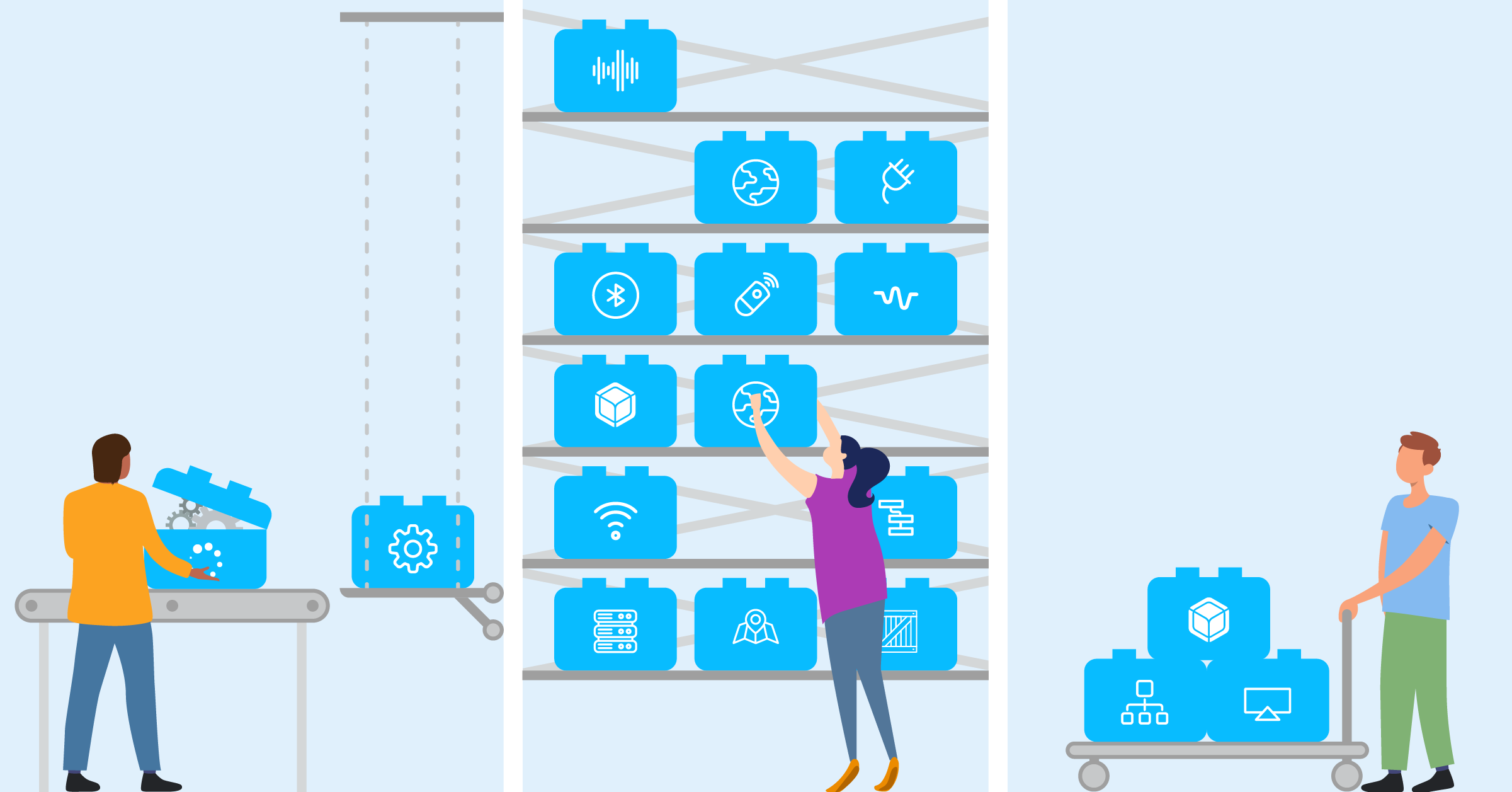 In a nutshell, they’re a container you can drop into your fleet to provide functionality to handle common tasks related to edge and IoT applications.
Blocks have been around for a while now at balena, and we've written about what they are and how to make your own in previous posts.
Our go-to example is always the browser block which provides a Chromium browser on any connected display and automatically displays any HTTP output also running on the device. For example, a developer creating a Point-Of-Sale system can focus on their payment application, and let the browser block take care of putting it on the screen.
You can find lots of other blocks on balenaHub.

What we wanted was to remove the friction of creating, managing and sharing blocks. We knew that manually building and pushing to Docker Hub while also pushing to balenaCloud was an additional burden that would slow down block development and possibly prevent developers from making blocks public. We also knew that having two places to push a block introduced the possibility of things getting out of sync, which imposed a further burden to the developer.
Starting this week, any block published to balenaHub is available to download directly as a container image, no additional registry pushes required! This also applies to any existing blocks as long as they have Visibility set to On and a Repository URL set in the block Settings dashboard.

The image reference format may be slightly different than what you are used to, so allow me to take you through some examples.
The expected format is bh.cr/<slug>/<commit or version> where:
Blocks created and maintained by balena are usually under the bh.cr/balenablocks org, but yours will match your organization name.

Find information about a block on its balenaHub page 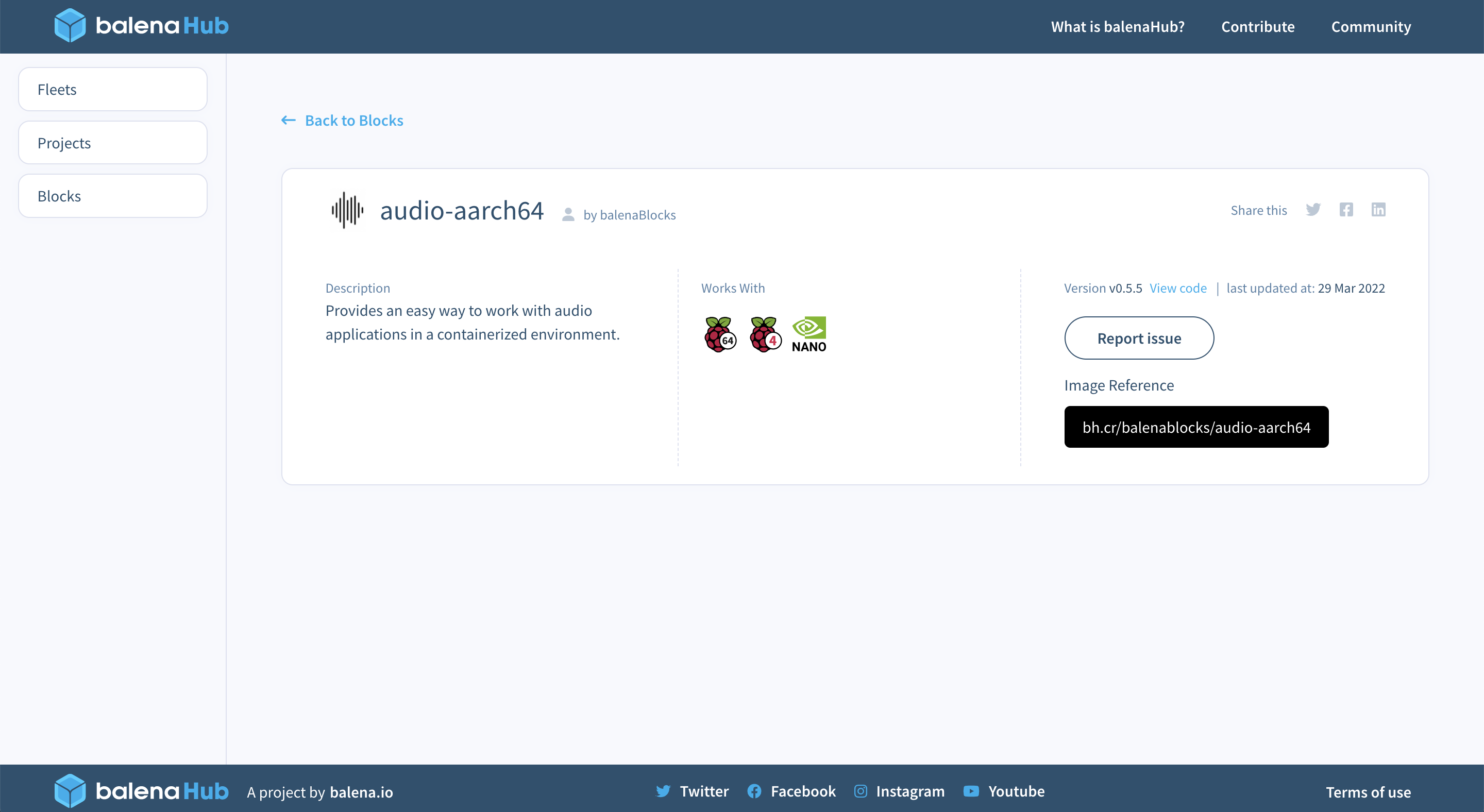 With this release, we’re happy to announce block pages on balenaHub. Now you can get more information about blocks, links to source code, and more.

Using the block Slug as shown in the Summary page would result in the latest version of the block being pulled. If the release track is not tracking latest, it will instead refer to the pinned release.

There may be situations where you want to pull a specific release of a block, and not the latest. While this could be accomplished by changing the release track in the balenaCloud dashboard, it can also be done in the docker-compose file where the block is used, by including either the commit hash or the release version in the image path.
Here’s how to pull a specific release version given several available releases in the dashboard.

Note that specifying a revision via +rev_ is not supported in image URLs as the plus sign is considered a special character. Instead, we will default to pulling the latest revision when a release version is provided.
So if there are multiple revisions of a release, for example 3.5.0, 3.5.0+rev1, and 3.5.0+rev2, specifying 3.5.0 in the image URL will result in 3.5.0+rev2 being pulled.
During development you may want to pull a draft release for testing. Since draft releases are not included in the latest release track, you must specify the whole version string including the build stamp.
You can also refer to a release by its build commit by copying the commit hash from the first column of the releases dashboard.
Additional examples can be found in our documentation.

Next we are working on multi-architecture blocks to enable publishing of images that can be applied to both ARM and Intel devices with the same release. The current implementation can support multiple device types, but is still limited to compatible architectures. This is a clear source of developer friction that we are working to resolve.
In the meantime, here’s how you can support multiple architectures with your block!
Start by pushing a release to separate blocks in balenaCloud, one per architecture, like we’ve done with the Browser block.

Testing and feedback are welcome